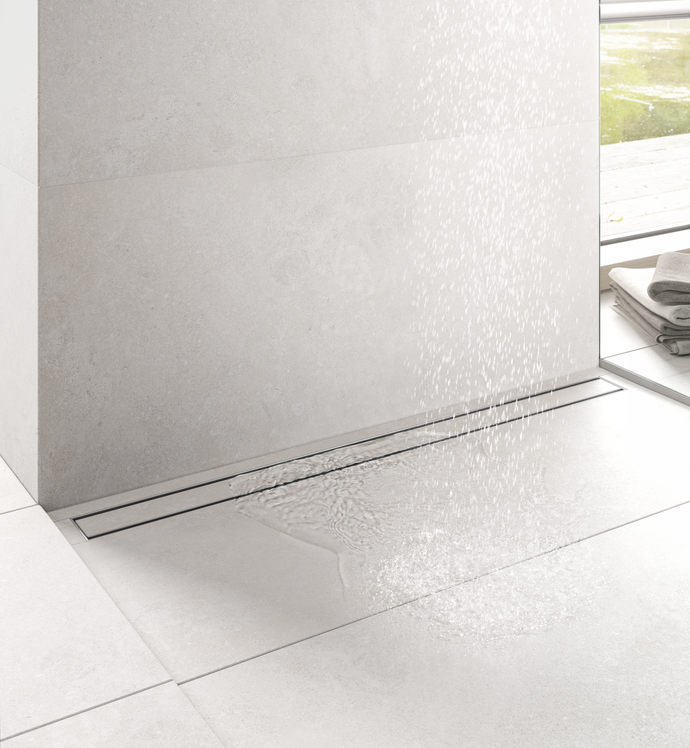 With the TECEdrainline shower channel, you can rely on effective shower drainage, purist aesthetics and maximum reliability. Simply attractive and without airs and graces.

Modern drainage works reliably - without being in the foreground itself. That's why the TECEdrainline shower channel in the modular system offers numerous variants of different covers, which allow it to fit almost seamlessly into any shower space. In addition, you have a large selection of different channel bodies. These make the installation of a shower channel at any desired position of the shower area quick, safe and reliable.

Whether as the classic TECEdrainline with stainless steel flange and Seal System sealing tape or new as TECEdrainline-Evo with factory-fitted sealing collar in the construction time protection and combined secondary drainage. What they all have in common is the perfect processing of easy-to-clean materials, which make the TECEdrainline shower drain channel not only durable, but also so practical. And that applies to both installation and use. 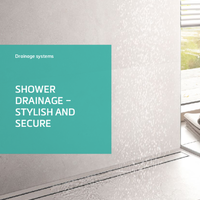 For all those who like things simple! The new generation of the shower channel, which has been used millions of times, simplifies installation for plumbers and tilers and puts an end to the either/or between capillary protection edge and secondary drainage. The proven product features, such as the easy-to-clean stainless steel channel with capillary protection edge, remain unchanged. Find out more about the new generation TECEdrainline-Evo here.

The advantages at a glance

The original model of the popular shower channel comes with a circumferential stainless steel flange and Seal System sealing tape for overlapping connection with the composite seal. Available as a straight version for installation close to and away from the wall. TECEdrainline is also available as a natural stone channel and as a version with wall upstand for installation flush with the wall.

The advantages at a glance

Where some shower channels show their unattractive side, TECEdrainline is even more convincing: with radiant cleanliness in no time at all.

The shower drain remains clean thanks to:

Shower channels offer the option of conveniently draining shower water. TECE shower channels do this with an attractive design and proven hygiene and technology. The shower area can be tiled continuously and uniformly when using shower channels. The cover of the channel can also be covered with floor tiles, making the shower channel very visually restrained and "almost invisible".

Shower channels and shower profiles are line drains. Point drains, on the other hand, drain the water to a point formed as a "point" in the design. With point drains, a slope on several sides must be created towards the drain. This leads to additional joints in the floor covering along the slope. With shower channels, only a one-sided slope towards the channel is required. This means that there are no additional joints in the floor covering. This can be visually advantageous, especially with large-format tiles.

The grate / cover is to be removed, cleaning can then be carried out with a suitable soft cloth. Detailed instructions can be found in our care instructions: https://www.tece.com/sites/default/files/media-documents/main/2020-03/A…

When selecting a shower channel, attention should be paid to various things: sufficient slope, positioning, sealing, etc. Basically, we recommend installation by an expert plumber and tiler. Via our exhibitor search, you will not only find dealers who sell our products, but also reliable and competent tradesmen in your area: https://www.tece.com/en/service/exhibitor-search?q=

Yes, in any case, a slope must be provided in the shower area targeted to the drainage solution.

The TECE modular system allows you to put together the best shower channel for the application (consisting of drain, channel and grate and, if necessary, further accessories such as mounting feet). You can find more information here: https://www.tece.com/en/drainage/tecedrainline/modular-system

TECEdrainline – our design shower channel for your bathroom